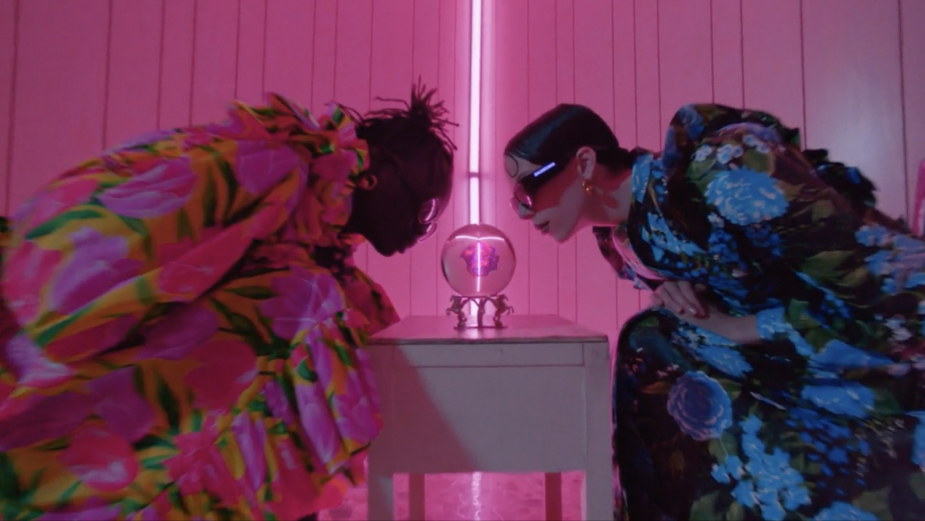 Time is not a relative journey in this mystical fable crafted for Odda Magazine. We move back and forth through our own timeline designed by our sensory experiences coded into our memory. Demna Gvasalia is no stranger to the ever flowing dialogue between the past and the present in his work for the Parisian house Balenciaga. His designs exist in the in-between of time combining and reinventing the classics of design with new technologies. Initially launched on the SS20 runway, Balenciaga has now released a retro-futuristic pair of LED Logo Sunglasses.

With these glasses, CHAOS, directing duo of Lesly Lynch and Julie Reali, sets out to capture the emotion of existing in the past while possessing a portal to the future.

CHAOS was birthed out of Studio Space Cowboys, a female driven collective of international creatives in New York, LA and Paris with the united mission to explore the fluidity of gender and sexuality through artistic expression. These progressive representations are contrasted by the references to Old Hollywood aesthetics. CHAOS is committed to including meaningful narrative into their surreal scenes. “We love to play with details as a key for the audience to unveil the meaning of our stories. Symbolism is at the core of the way we give sense of the world we are living in.

CHAOS collaborated with models Ella Snyder and Duot Ajang to embody the expansion of the characters’ sensory experiences beyond their immediate tangible world directly through the Balenciaga LED sunglasses’s ability to transform reality.

The two models represent the future of fashion and transparency of identity in media today. Ella Snyder, former Parsons Student has made multiple contributions and appearances to pieces of trans visibility such as her participation in the BBC2 documentary ‘Transgender Kids: Who Knows Best?’. She is now represented by Hello Management and is blazing the way for trans representation in fashion media in both LA and New York.

Duot Ajang, born and raised in Kenya, while relatively new to the fashion scene in New York, has already appeared in the likes of Balenciaga. Duot recently appeared as a leading role in ‘Passage’ by Solange Knowles for Saint Heron. Represented by Muse Men, Duot has brought a refreshing energy and editorial attitude to all that he has worked in.

CHAOS and Studio Space Cowboys also partnered with cinematographer Fletcher Wolfe and with creative studio Nice Shoes to deliver the two different looks of the film.

Fletcher Wolfe remembers: “We wanted the color scenes to feel like the audience is directly experiencing the sensations in the characters’ brains, sensations they couldn’t access in the grey world. We used very wide angle lenses (a Zeiss 10mm Distagon, and an Innovision Probe with 9mm and 16mm) close to the models.. We then worked with colorist Maria Carratero to amp up the bold colors and push the black and white contrast very high.”

Senior colorist Maria Carretero graded the film to reflect the dichotomy of the spot. The black and white palette in the beginning brings the retro feel and look of the film to life, which is then contrasted with the crazy, wild and vibrant colors in the second part. Maria Carretero, senior colorist at Nice Shoes comments: “We focused on minimizing the texture and adding crispy-ness, whilst also keeping the glow vibrant in the mid-tones, which helped preserve the modern feel of the spot. It was a very collaborative process and it was a pleasure working with Space Cowboys and CHAOS.”