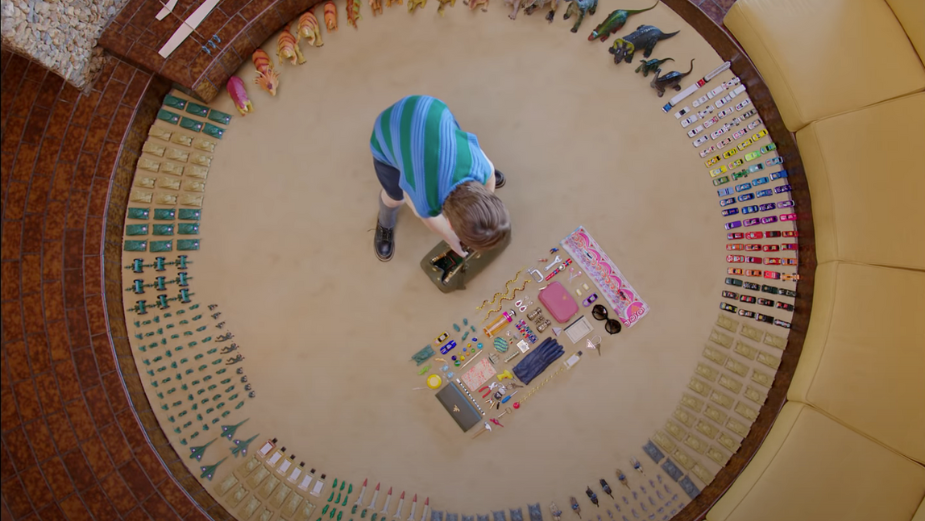 News
How Color Changes Our Emotions

This article is the second in Nice Shoes’ ongoing series investigating how Color Changes Everything for brands. Click here to read the first instalment.

When we’re sad, we ‘feel blue.’ When we’re angry, we ‘see red.’ This instinctual connection between color and our emotions is not a linguistic coincidence; It’s the result of a deep and meaningful relationship between our state of mind and the colors we perceive in the world around us.

“People don’t always realize what an emotional impact color has on them as viewers,” notes Nice Shoes’ senior DI colorist Marcy Robinson. “Even when something looks really natural and normal. Because there’s an infinite range of what would be considered ‘natural’ and ‘normal’ from a colorist’s standpoint, how that normalcy is interpreted and presented has a marked effect on the way images reach out to audiences. We can characterize certain palettes as warmer, cooler, brighter, moodier, more saturated, and perhaps creepy or happy; but beyond that, it’s less clear how color drives story and plays with rhythm. The way music, for example, can literally steer things by scaring us or asking us to rejoice seems obvious. Color is less talked, about and less recognizable.”

And yet, despite the inherent subtlety of color, it’s deeply and firmly embedded within our psyches. As senior colorist Sal Malfitano explains, “one example is how we’re conditioned to associate certain times of the day with certain colors, When the sun is going down there tends to be a more orange hue to our surroundings, and simply using that color can bring that time of day to mind. So much of it is unconscious.”

And so, for innovative creative minds, color has always been a key strategy to connect with an audience’s emotions. For a simple example, look to Pixar’s Inside Out, a 2015 animation in which human emotions are the main characters. In that film, Sadness is blue, Anger is red, Joy is yellow, Fear is purple, and Disgust is green. In an interview with the Wall Street Journal, the film’s writer and director Pete Docter explained how those colors needed to be recognizable across different cultures (settling on green as Disgust, for example, because ‘bad food always turns green’).

Above: In Pixar’s Inside Out, emotions are mapped onto colors in a simplistic but meaningful way.

Of course, the real-world relationship between color and emotion is not so uniform. We don’t feel depressed when we see a blue sky, and a glass of red wine is hardly likely to spark rage (provided it doesn’t spill onto our furniture). Indeed, an ingenious visual trick from Inside Out sees those colors mix in order to symbolize more complex emotions. When we see the yellow of Joy and the blue of Sadness combine at one point, that creates nostalgia.

In reality, color affects our psychology on levels so subtle and subconscious we could go through our lives without realizing its effect on how we behave. As part of a groundbreaking 2011 study, students from Berkeley and Stanford (two arch-rival American colleges) were asked to express how certain colors made them feel. Interestingly, Stanford students responded positively to red and white (their college’s colors) and negatively to blue and gold (Berkeley’s traditional colors). For Berkeley students, the exact opposite was true.

And, on a basic level, color influences consumer purchasing decisions profoundly. In the automotive industry, 60% of customers identified color as a significant factor in their decision to buy.

Color, then, is the key to unlocking not just our emotions but speaking to our very identities and informing our attachments. For creatives and brands, this is a powerful lesson but, in 2022, there’s evidence it may need to be relearned. To unpick the powerful links between color and emotion, Nice Shoes has enlisted the help of experts alongside new research.

“As well as influencing our moods, color has a habit of reflecting our mental state. Throughout history, it’s provided a fascinating glimpse into our cultural psyche.”

As the chief innovation officer at System1 (and the author of Lemon and Look Out), Orlando Wood dedicates much of his time to the relationship between creativity and what we describe as ‘effectiveness’ in advertising. As a result, he’s concerned about what the modern use of color right across society says about our collective state of mind, and the kind of creativity audiences respond to.

He also understands the connection between color and the complexity of the human brain. “Something I’ve always found utterly fascinating is the career of Visconti, the legendary Italian filmmaker prominent in the 1960s and 1970s,” he explains. “If you look at something like Death In Venice, you’ll see these almost brilliantly bright colors and awesome scenes depicting the sun rising over glimmering water.”

Towards the end of Visconti’s career, however, tragedy struck the director. “In the mid 70s he unfortunately suffered a right brain hemisphere stroke. He recovered to such a degree that he returned to filmmaking, but his last two films are strikingly different visually,” continues Orlando. “L’Innocente, for example, saw lots of dark clothing, and people standing statically, staring almost vacantly at the camera. It was like the color and vibrancy had been washed out.”

The stroke suffered by Visconti, explains Orlando, damaged the right side of his brain to the extent that he no longer assigned the same value to bright and diverse colors. “We know that the right brain enjoys and deals well with vibrant, warmer colors,” says Orlando. “The left brain, by contrast, prefers sharp imagery standing out in front of more dulled backgrounds. My contention is that our culture has been speaking so prominently to the left brain for so long now that we’ve neglected our right brains. We are missing those warmer colors to which we know, for example, audiences respond more positively in advertising.”

And so what happened to Luchino Visconti as a tragic medical accident, has perhaps been slowly afflicting popular culture and our collective consciousness over a period of years. But, for brands and advertisers, what does this mean?

The power of color to motivate consumer behavior is a long-established (but perhaps not widely-understood) phenomenon. In arguably the most famous example, red and yellow have become popular colors for fast food brands due to their ability to trigger “stimulation, appetite, hunger, and attract attention.” In fact, the color combination has become so popular within the fast food industry that it’s playfully been termed ‘the ketchup and mustard effect.’

And yet there are plenty of other examples of brands leveraging color to spark and communicate emotions. The color blue is prominent amongst tech companies (Dell, Intel, and Meta being three examples), and is also connected to feelings of “trust, security, order, and tranquility.”

Amidst a fast-moving and competitive category, these brands are able to subtly transmit reassurance through color.

Ultimately, a brand’s choice of color should reflect what they want to communicate about themselves to their target audience. Speaking to Metro UK, marketing advisor and founder of the Business Academy Nikki Heresford notes that “Marketing is about connecting with people emotionally; creating stories, tapping into their hopes, dreams, and insecurities. Colors play a leading role in that due to how people subconsciously process them. Whether we are aware of it or not, colors have connotations and we make immediate judgments based on that.”

Emotions, of course, are complicated. They can be triggered by a sense of place, smell, touch, and memories specific to an individual. Because of its inherent subtlety, however, it can too often be overlooked. Whilst it may rarely be the first thing audiences notice, it hits consumers on a deep psychological level that we need to understand. Resultantly, brands looking to connect with audiences on an emotional level need to take an enormous level of care.

Gene Curley is a senior colorist at Nice Shoes and was part of the team which brought Prada’s ambitious ‘The Postman Dreams’ campaign to life through his work in color. As part of a high-concept campaign for a household name brand, the short film named Battlefield sums up color’s subtle power to speak to our emotions. The film (shot by Autumn De Wilde) conjures up a kind of dreamscape, simultaneously evoking feelings of comfort and safety.

Above: Battlefield, shot by Autumn De Wilde with color from Gene Curley, is subtle in sparking emotions through surreal themes.

“The direction for that spot, and the director Autumn’s overall vision for this series of mini-films, was to make it somewhat like a dream where there was a heightened sense of reality,” recalls Gene. “So the goal was to keep things somewhat natural but also surreal and colorful. To achieve that, I leaned into subtle hints of pastel throughout the film.”

The result is a film which oozes warmth – not just directly through color but also the dreamlike memories it speaks to with its surrealist tone. “Dreams are inherently emotional things,” says Gene, “and you can’t persuade an audience that they’re in one by being heavy-handed. You need subtle and intentional use of color.” Throughout the film, pops of bright color punctuate the visuals and cut through to add to the overriding sense of childlike play.

And it’s not just positive emotions which can be sparked by color. As Sal notes, filmmakers can use it to mislead and surprise audiences, too. “One great example of that is Oliver Stone’s Natural Born Killers,” he says. “That film includes scenes which use bright and simple colors – the kind we associate with a light and fun comedy – for scenes which are incredibly disturbing in their content. The result is that the confusion and the surprise is ramped up even further, and it’s color which amplifies that.”

Above: Natural Born Killers, from director Oliver Stone, features scenes which employ an innovative use of color to spark an emotional reaction from the audience.

And for brands, color has long been a key tool with which to communicate their identity and to connect with our emotions. Coca Cola, for example, is so synonymous with the color red that the company has been able to recruit Santa Claus himself as a brand mascot. In doing so, the brand can reliably evoke Christmas-related feelings of nostalgia and comfort on an annual basis.

In Orlando’s experience, effective use of color is utterly vital to successful communications. He argues that “the important thing in audio visual advertising is to create work that has multicolored human vitality in it, because that’s what captures and holds our attention. All the available evidence tells us that warmer colors are more successful at doing this than cooler ones. They make us more comfortable, they elicit positive emotional reactions, and we tend to want to continue watching something warmer for longer.”

And so, by mastering color, brands have an opportunity to work with human psychology rather than against it. For brands looking to stand out and forge authentic connections with their audience through emotion, color presents an unmissable opportunity to do so.

Read the article on LBB HERE.