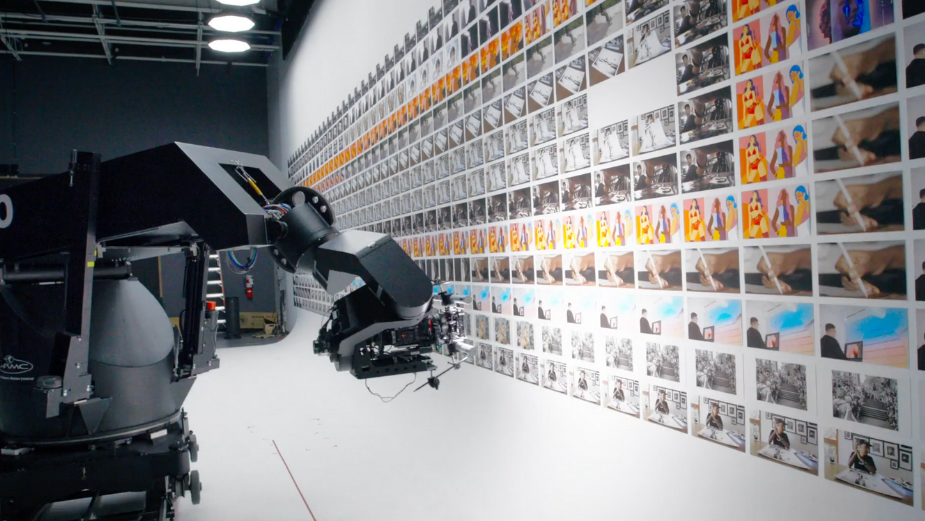 Some products, it’s often said, do their marketing for themselves. And yet that’s rarely been applied quite so literally as it has been with Canon’s ‘printed on film’ ad, brought to life by the Nice Shoes’ Global Executive Creative Director – Harv Glazer.

In a bid to capture the magic of Canon’s high-quality range of printers, the ad consists of painstakingly printed and mounted shots, filmed together to create an eye-catching flipbook effect. The spot also features an appearance from the iconic skateboarder and photographer Atiba Jeffersen – who just so happens to be one of Harv’s own creative heroes.

Happily, the team behind the ad also produced a ‘behind the scenes’ film, documenting the labour of love that went into the campaign. 546 printed images, 300 hours of printing, 24 hours of mounting, 1 robotic camera arm, 3 days in a studio, 1 canon C700 and 4 canon printers later, the campaign brings together a perfect blend of filmmaking and photography.

To find out how it all came together, LBB sat down with Harv…

LBB> THE STYLE OF THIS SPOT IS OBVIOUSLY INCREDIBLY UNIQUE AND DISTINCT. DID YOU DRAW INSPIRATION FROM ANYWHERE – BE IT OTHER FILMS/ADS OR ELSEWHERE? Harv> The key inspiration came from the flipbooks of my childhood. The real creative challenge here was figuring out the best way to achieve that same effect.

LBB> AND WHEN YOU WATCH THE FINAL FILM, HOW CLOSELY DOES IT ALIGN WITH YOUR VISION/BRIEF GOING INTO THE PROJECT?

Harv> I’m one of those directors who can see the outcome of an in-camera effect before it happens. I’ve designed so many in camera tricks with my DPs over the years that my mind actually goes there first before jumping to CGI.

I’d always rather make magic in this way – a lot of my work in my career was shot on film when we couldn’t do playback, or didn’t even have monitors to view what we were shooting. And yet we still pulled off magical moments. That’s what gives me the confidence to create in this way.

LBB> FRANKLY, THE EFFECT ON-SCREEN HERE IS SO COOL. WHY ISN’T MORE STUFF SHOT LIKE THIS?! Harv> It takes time, it takes money, it takes patience, and most of all it takes a vision that understands the outcome of two days’ work without needing to see it play out on the monitor first.

LBB> HOW CLOSELY DID YOU WORK WITH CANON AND GREY THROUGHOUT THE PROCESS OF MAKING THIS SPOT?

Harv> When Grey approached us with the idea I knew exactly how to pull it off (and I think that’s what sold them on me!). I didn’t need to discuss it with anyone, I knew exactly the tools we needed, and how we needed to use them in an untraditional manner to make this happen.

Motion control is an amazing tool for many shots but this wasn’t motion control in the traditional sense. This was programming every frame of the move, not starting with a beginning and end, and letting the computer figure out the math. We wanted it to be perfect, yet organic-feeling. We knew the viewer wasn’t going to see how we did it, but it was still worth the effort to do it properly. I do that a lot, go the extra mile even when only we will know we did it, as the love you put behind the camera makes a tangible appearance in front of it.

My DP Ray Dumas was also a huge part of this – we’ve worked together for 20 years and have similar styles when it comes to creative work in camera, so he was all over the idea from the get-go and brought a lot of knowledge to the table.

LBB> THE BEHIND THE SCENES FILM SHOWS US A REALLY UNIQUE SET. WHAT KIND OF CHALLENGES DID YOU ENCOUNTER IN GETTING IT PREPARED – AND HOW EASY WAS IT TO GET RIGHT ONCE IT WAS ALL SET UP?

Harv> That’s the result of hard work and manual labour from my production designer Diana Abbatangelo. I gave her a road map I built in after effects that showed her what I wanted, and I walked through the math with her in the studio, but from that point on it was a huge undertaking on her behalf.

It was a case of managing a massive team of people printing each frame, cutting and mounting, and making sure everything is in the right order and following the camera pattern. That’s not an easy job when you have 700+ frames and many of them look almost exactly the same upon first glance. This part of the process took the longest time, but let me tell you something: those printers are incredible, Canon isn’t lying! What you see is what you get, hit print and go.

LBB>AND OUTSIDE OF THE SET ITSELF, WHAT WAS THE MOST CHALLENGING ASPECT OF THIS PROJECT AND HOW DID YOU OVERCOME IT?

Harv> The final shot, figuring out where the transition should happen on the wall based on the lens we were shooting and what the travel would look like to the printer, then timing that out with the print actually coming out of the printer. That was the hardest part for sure.

LBB>IF YOU HAD YOUR TIME AGAIN, WOULD YOU DO ANYTHING DIFFERENTLY? IF SO, WHAT?

Harv> I’d want more prep time, a bigger studio, and another day with the motion control rig. As an artist I always would love the extra time to play but in reality, does it need it? Definitely not.

LBB> FINALLY, WHEN YOU LOOK BACK IN A FEW YEARS’ TIME, WHAT WILL BE YOUR FAVOURITE MEMORY OF THIS PROJECT?

Harv> The thing that made me want to do the project to begin with was Atiba Jefferson. He’s one of my skateboard heroes, and skateboarding is something I care very deeply about. I worked in the industry for years, and still sell skateboards under my own art brand. Atiba is such an amazing photographer and the fact that my art (the commercial) blew him away when it was his art that was inspiring me for years… that was a very cool moment. We chatted online afterwards, and we were both stoked with the experience.