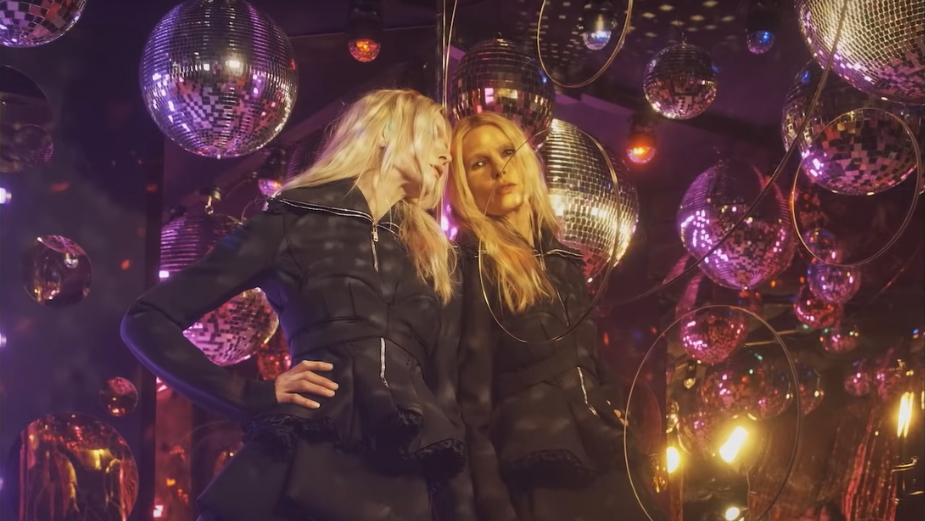 The first spot, entitled ‘The Expressionists’, blends vintage nostalgia with contemporary city life, set partly between the dance floor and modern day New York. Starring Denée Benton (HBO’s “The Gilded Age”) alongside House of Slay founders Ezra J. William, Laura Kim, and Prabal Gurung, the chic cast roller skates through the halls of Bergdorf Goodman, as sparkling disco balls and bold lighting play to maximum impact. The second spot, ‘The Ultimate Party’, takes the form of a documentary-style film, reminiscing over the department store’s iconic star-studded history. Juxtaposing new and archival footage, the viewer gets a real sense of the brand’s enduring legacy of the department store, and the powerful reputation it wields in New York.

To achieve the modern vintage film aesthetic, colorist Gene Curley collaborated closely with director and editor Cooper Troxell, as well as DP Jason Chau who provided the look book for the color grade. For the store sequences, they chose to go with a warmer feel, whilst keeping the shadows and overall color contrast neutral; for the dance floor sequences, they embraced more dynamic lighting, with cooler shadows and a hint of warmth in the skin tones.

The campaign features a blend of styles, contemporary and historical, to capture the sense of Bergdorf Goodman’s enduring legacy. Celebrating creativity, individuality and freedom of expression, the visually arresting short films nod to the 1970s while being underscored by the colorful fashion and individualistic styling of today. This evolution in the brand’s creative look is brought to the forefront of documentary-style ‘The Ultimate Party’, which addresses the development narratively with a glimpse at past and present, tying new and archival footage together through color.

Gene Curley, colorist at Nice Shoes, comments: “Fashion campaigns are about displaying a feeling, and above all else, the personality of the brand. The look and mood can vary widely between campaigns, but it’s always about letting the identity have a real presence. This project encompasses all of that, while at the same time exploring the history and past of Bergdorf Goodman, and how it is still evolving for the modern fashion world.”

The campaign is the latest installment in Nice Shoes’ rich history in the fashion space, having previously graded campaigns for the likes of Balenciaga, Prada, and Louis Vuitton. It launched on April 15 across Bergdorf Goodman’s digital channels and through key paid media placements.